Jim Virdee awarded the W.K.H Panofsky Prize by the American Physical Society for his leadership in the construction of the CMS detector 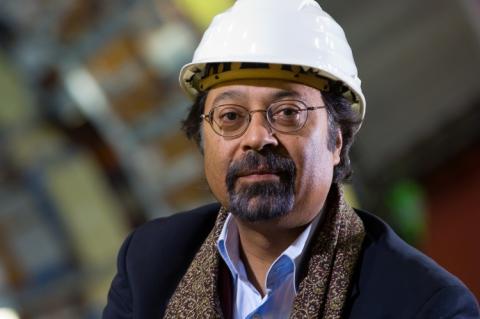 Sir Tejinder Virdee of Imperial College London and member of HiggsTools has been recognised by the American Physical Society (APS) through the award of the W.K.H. Panofsky Prize in Experimental Particle Physics (jointly with Michel Della Negra and Peter Jenni). This prize is given to recognize and encourage outstanding achievements in experimental particle physics, and is open to scientists of any nation. The full citation reads: "For distinguished leadership in the conception, design and construction of the ATLAS and CMS detectors, which were instrumental in the discovery of the Higgs boson." Jim is one of the "founding fathers" of CMS, and carried out the first detailed simulation studies of the most plausible way to detect the SM Higgs boson in the low-mass region in the environment of the LHC: via its decay into two photons. The design and construction of the high resolution electromagnetic calorimeter in CMS played a crucial role in the discovery of the new heavy boson. He has received numerous prizes for his work and was knighted in the Queen's Birthday Honours list for services to science in 2014.
Submitted by ewng on Sat, 15/10/2016 - 13:33